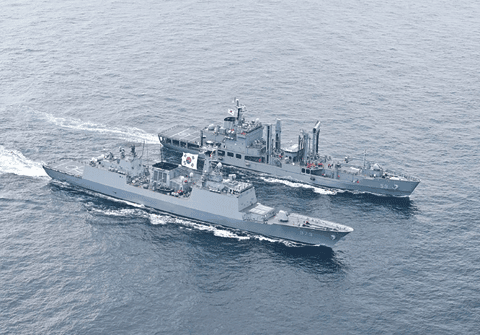 The Republic of Korea Navy (ROKN) arrived in Sydney, Australia on October 30th for a five-day port call. The two-ship group is on an 110-day deployment to the Indo Pacific region and arrives at a time of deepening bilateral defense cooperation.

The centerpiece of the ROKN’s training day is the new helicopter training and casualty receiving ship ROKS Hansando (ATH-81). This frigate will be commissioned as a part of an inaugural training day in 2021. In order to transport it, this year’s deployment is supported by a fast combat support ship. That ship is the destroyer ROKS Daecheong (AOE-58).

The Royal Australian Navy’s procurement of the AS21 Redback and the evaluation of the AS10 Huntsmen by the Australian Army has impacted Australia-Korea defense relations. Now, South Korea appears to be on their way to make a bid for Australia’s challenging naval market.

Earlier this year, representatives of the Korean navy visited Australian representatives to discuss their new design for an advanced diesel-electric submarine called the KSS Batch-II. Officials promise a vessel that will be able to compete with LOTE in terms of speed and range while also providing greater flexibility. To top it off, they propose having capabilities similar to ballistic missiles and torpedoes because they’re equipped with the right system.

Despite claims made by the RAN and the Australian Department of Defense, there will not be a capability gap between the phase-out of the Collins class submarines and whatever eventuates from AUKUS in the early 2040s. They have, however, been disputed by several experts who argue that even though the Collins is over 50 years old, it’s young enough to still benefit from further modernization.

Many submarine manufacturers have been looking at the situation in Australia, sensing a possible opportunity. Saab, who designed the Collins class, has been quite publicly advertising their long-range A26 submarine to the RAN. Despite the collapse of its earlier Attack class program, French President Macron reportedly raised the prospect of building up to four such vessels for the RAN during an informal meeting in July.